Infrasound is low frequency audio beneath the human range of hearing. Infrasound constantly surrounds us, generated naturally; wind, waves, earthquakes and by man; building activity, traffic, air conditioners and so-on. Low frequency sound is used by marine mammals to communicate over vast distances and by birds to determine migration patterns.

At higher volumes infrasound of around 7-20hz can directly affect the human central nervous system causing disorientation, anxiety, panic, bowel spasms, nausea, vomiting and eventually unconsciousness (supposedly 7-8hz is the most effective being the same frequency as the average brain alpha wave). The effect is unintentionally (or not?) generated by the extreme low frequencies in church pipe organ music, instilling religous feelings and causing sensations of “extreme sense sorrow, coldness, anxiety, and even shivers down the spine.”(1) in the unsuspecting congregation. Low frequency sound generated naturally or by building work and traffic is said to be the cause of reported apparitions and hauntings (2) – blamed on the ghostly 19hz frequency which matches the resonating frequency of the human eyeball:

7 Hz: Supposedly the most dangerous frequency corresponding with the median alpha-rhythm frequencies of the brain. It has also been alleged that this is the resonant frequency of the body’s organs therefore organ rupture and even death can occur at prolonged exposure.

1-10hz: “Intellectual activity is first inhibited, blocked, and then destroyed. As the amplitude is increased, several disconcerting responses have been noted. These responses begin a complete neurological interference. The action of the medulla is physiologically blocked, its autonomic functions cease.” (Gavreau )

50-100hz: “intolerable sensations in the chest and thoracic region can be produced – even with the ears protected. Other physiological changes that can occur include chest all vibration and some respiratory rhythm changes in human subjects, together with hypopharyngeal fullness (gagging). The frequency range between 50 and 100 Hz also produces mild nausea and giddiness at levels of 150 – 155 dB, at which point subjective tolerance is reached. At 150 to 155 dB (0.63 to 1.1 kPA), respiration-related effects include substernal discomfort, coughing, severe substernal pressure, choking respiration, and hypopharyngeal discomfort.” (Davies)

The first documented attempt to reproduce the infrasound effects was by the much mythologised Russian/French physicist Vladimir Gavreau in 1957. Gavreau became interested in infrasound when he was asked to cure a case of ‘Sick Building Syndrome’; Staff at a research plant in Marseilles were mysteriously falling ill. Chemical or pathogen poisoning was suspected but Gavreau eventually traced the origin of the illnesses to an air conditioning units rotating fans that were generating low frequency sound waves. Gavreau began to experiment with low frequency acoustics with the intention of creating a viable audio weapon for the French military. Several prototype designs of various sizes were produced christened ‘canon sonique’ consisting of piston driven tubes and smaller compressed air horns and whistles. Gavreau and his team tested the instruments on themselves at the Marseilles plant with unexpected success as apparently one of the team died instantly “his internal organs… mashed into an amorphous jelly by the vibrations”:

“Luckily, we were able to turn it off quickly. All of us were sick for hours. Everything in us was vibrating: stomach, heart, lungs. All the people in the other laboratories were sick too. They were very angry with us. “ 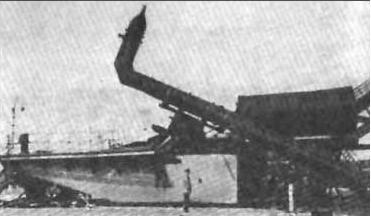 (image: Dr. Zippermeyer’s Luftkanone stationed at a bridge over the Elbe river to defend the bridge from enemy aircraft)

The only known audio weapon to have been deployed was developed by the German military during the final phase of the Second World War. The ‘Luftkanon’ or ‘Wirbelwind Kanonew’ as a sound weapon designed to shoot down enemy aircraft by creating a vortex of sound:

“…design consisted of a parabolic reflector, 3.2 meters in diameter, having a short tube which was the combustion chamber or sound generator, extending to the rear from the vertex of the parabola. The chamber was fed at the rear by two coaxial nozzles, the outer nozzle emitting methane, and the central nozzle oxygen. The length of the chamber was one-quarter the wavelength of the sound in air. Upon initiation, the first shock wave was reflected back from the open end of the chamber and initiated the second explosion. The frequency was from 800 to 1500 impulses per second. The main lobe of the sound intensity pattern had a 65 degree angle of opening, and at 60 meters’ distance on the axis a pressure of 1000 microbars had been measured. No physiological experiments were conducted, but it was estimated that at such a pressure it would take from 30 to 40 seconds to kill a man. At greater ranges, perhaps up to 300 meters, the effect, although not lethal, would be very painful and would probably disable a man for an appreciable length of time. Vision would be affected, and low-level exposures would cause point sources of light to appear as lines.”

Much written about infrasound and infrasound weaponry is based on mythology, conspiracy theory and bad science. despite this, attempts to debunk the theory have failed to destroy the interest in sound weapons with new rumours emerging of Russian secret weapon factories exploding and US police using infrasound as riot control. Probably the best analysis is Jürgen Altmann’s paper on the feasibility of sonic weapons which remains tantalisingly inconclusive; low frequency sound can cause physical damage but is impractical as a weapon.

A link to an interesting debate on the feasibility of building low frequency speakers: http://srforums.prosoundweb.com/index.php/mv/tree/27986/261708/72/

“The US military was playing with a helicopter mounted sonic device back in the 70’s I think. You dropped a pickup on top of a concrete pill box, three helicopters would position out of range
and bombard the pill pox with a sine wave. Once the resonant freq was dialed in, the concrete crumbled to dust in a minute or two. Very effective but dangerous as a minute is an eternity on a battlefield.”

2. Vic Tandy. University of Coventry UK. “The Ghost in the Machine.”

the Sonic Weapon of Vladimir Gavreau, by Gerry Vassilatos

The physical dimension of sound, its potential to become a source of corporal pleasure, its invisibility, its immateriality, its power to generate emotions or affect our bodies without passing through the barriers of reason and without leaving traces… All these aspects have turned particularly important in the context of a society of control, where the different discourses of power need technologies to perform their dominance, or simply to attack and defend themselves. This is the role of sonic weapons.

The sound work proposed by Escoitar.org, a radiophonic short tale placed somewhere between a documentary and a radio-art piece, is based in the remix of audiovisual documents found across a long and deep research about certain uses, developments and technological implementations of sound. The work proposes both a conceptual approximation to this subject matter and a revealing sonic experience, carried out through an analysis of the impact and the effects of these technologies, their uses and their abuses.

Digitally processed sounds from interviews, recordings of sonic weapons, fragments of works by different artists and recordings of acoustic signals and control devices (such as bells, sirens…) made by Escoitar.org are mixed and intertwined in “Sonic Weapons”. A radiophonic work that pursues a double goal: on one side, to make the listener aware of a problem that affects sound and listening, conceived as control devices, and, on the other, to create a passionate sonic gesture in order to maintain sound safe and to keep working for its freedom.